I don’t know what was up with the weather, but May 27 started out cold too, with a low-hanging cloud of fog over the whole town and a layer of dew on the grass. And it made for an amazing backdrop to the scene with The Man.

I’d been imagining a scene with a character known as The Man for something like 7 years and always with the same elements: a tropical shirt, shorts, a lawn chair, in someone’s backyard, but yet in another dimension. We’d tried it before for Adventures in Hot Springs, but it ended up being rushed. Not so with this scene. With only two cast members, Deana and myself on set, we got to dedicate as much time as we wanted to the scene and it turned out to be the best-performed in the whole movie. Something about Daniel’s caliber of acting made Aspen (already a good performer) step up her game. Glances and expressions were more nuanced, lines less “I just read this a minute ago and am saying them as fast as I can without being too obvious because I don’t want to forget them already.”

Really, I’ve just gotta let the videos speak for themselves. The direction I gave was, in my opinion, minimal. Daniel took the character of the Man and ran with him, improvising huge chunks of dialogue. I couldn’t have asked for a better morning to perk me up from having missed my three-day goal.

In fact, the only real problem was that midway through the scene, we realized that Jamie shouldn’t have her satchel. It had been stolen in the scene immediately before. So I came up with an on-the-spot in-universe explanation: when in the 6th dimension, you appear as you view yourself. To the Man, even having come from the middle ages, he’s a laid back beach bum at heart. To Jamie, her satchel is part of who she is at this point in her life. It signifies her adventurous nature – and probably some secrets. Or something like that. Instead of ignoring it, we addressed it in the opening shot straight on with an improvised line, and for the most part, later on, audiences never even cared or noticed. 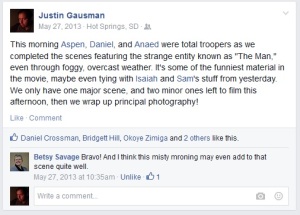 With the Man’s sole scene complete, Daniel headed home and we took a huge middle of the day break, waiting for the other cast members, who had not originally planned for an extra day of filming, to get off work and out of other commitments. I finished the re-write of the “hotel” scene, now set to take place at a location near Cold Brook lake. There was still a factor missing – I still hadn’t determined whether I would need to film some very minor insert shots with Michael as Dorn later or just overdub his voice to flesh out some of the remaining exposition before it could be complete – but it was a “good enough” replacement considering the situation.

At around 4:30 that afternoon, with Isaiah, Okoye, Sam, Garett and Aspen all back in the game, we resumed what I believed would be the final day of shooting.

We took the opportunity to fill in the remainder of the “holes” from prior days’ shoots, finishing up shots we had missed from the opening and closing the film at Jamie’s house, then heading out to Cold Brook to film the new scene. An early joke made in development of the script about “thinking caps” finally made it in the film via two silly wizard hats, and we included a couple more zany bits inspired by Top Secret and the 1966 Batman TV series.

Lastly, we went back to Chautauqua Park and filled in shots that would be edited in opposite Michael & Aspen. We wrapped with a shot of Sam arresting Isaiah. I sent everyone home with my gratitude and let them know I’d keep them in the loop as post-production began.

Anxious and excited to see what would come of it all, I had already started drafting an early edit, and had already begun to see some scenes start to come together. But as a cohesive whole, I’d have to hunker down and start bringing it all together and see if there was anything missing.

-You’re not a failure if you miss a goal. Sometimes a failure creates the opportunity for the greatest successes.

-If you’ve got a great improviser, give them the flexibility to do what they do best. That’s when you get the gems.

-If you can, start assembling what you can ahead of time. Even in its roughest state, it will help you find if something was missed. In the heat of the moment it can be difficult to recognize you’ve completely skipped over something important.