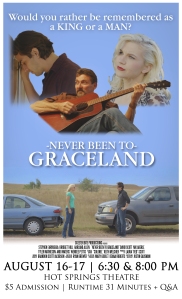 Exciting news! Never Been to Graceland, after 4 years of work, will finally premiere August 16-17 at the Hot Springs Theatre in Hot Springs, SD and August 18-19 at Seraphim Theatrical Entertainment in Rapid City, SD!

On August 16, it will also be available on Amazon through Amazon Video Direct, which is arguably even more exciting!

It is an understatement to say that after 4 years, I have a lot of mixed feelings about finally unleashing the film onto the world! I will have to write about them soon… Just wanted to get the word out!

It’s here! One year of production, four years of development and 16 years of inspiration has led to this! Never Been to Graceland is almost complete!

We have officially launched an IndieGoGo to help facilitate pre-orders – check it out here and get your order in!

So where does the title of Never Been to Graceland come from? Well, from a key line during an exchange of dialogue that has been included in every iteration of the story going all the way back to the original August 12, 2013 first story treatment. (Which is not included in the above drafts as the paragraph it appears in there also includes story spoilers that also carried through all drafts and versions.)

For all of the changes to the story, major and minor, including changing the MacGuffin from a lost Elvis movie to a lost Elvis song, the addition and subsequent subtraction of an array of secondary characters, side plots, and fully fleshed out backstories for nearly all the characters… AJ – who evolved from snarky 17 year old hipster to mid-20s lifestyle journalist – has always been the one to ask if Michael’s been to Graceland and his response has always been the same.

The idea of the phrase “never been to Graceland” is to not only set Michael as a character apart from what one would consider an “average” Elvis fan, but also to signal to the audience that their expectations about what they think about the film, the characters and Elvis (both the man and the celebrity) might be challenged.

After a late-night editing session, we are one step closer to being finished with the film! We are about one last edit away from a picture lock and we are sitting down this weekend to begin work on the sound mix and music! We cannot wait to share this film with you and August cannot come soon enough! Until then, please enjoy another preview clip, this time featuring David Scott and Harland Allen as Bryan and Larry!

“Never Been to Graceland” is a story about five characters – Larry, Amy, Bryan, Michael and AJ, people of different generations whose their lives become unexpectedly intertwined when a long-lost Elvis Presley movie is supposedly found. “Never Been to Graceland” is a story that will hopefully be unique among King-of-Rock-related tales in the way it treats not only its audience, who have had more than enough winks, nods, “hunka hunkas” and “uh huh huh’s”, but its characters, who are just people who happen to like Elvis.